DISCLAIMER: THERE ARE AFFILIATE LINKS IN THIS POST. THIS MEANS THAT AT NO COST TO YOU, I WILL RECEIVE A SMALL COMMISSION IF YOU PURCHASE THROUGH MY LINK.

To get the best performance from paints, you must prepare the surface before applying it. The rusty surface is covered with a weak layer of iron oxide that prevents the paint particles to bind with the iron surface. So, removing the rust must be a priority.

The two common methods of tackling rust are rust conversion and rust removal. This article focuses on how these methods take care of the sinister evil, known as ferric oxide AKA rust, and a comparison between the two methods.

So, rust converter and remover, which is better? Stick around to witness this epic showdown! 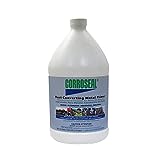 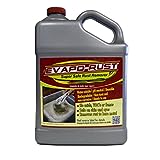 What Is Rust Converter?

What if you can make your enemy fight for you?  Rust converters turn rust into a non-reactive iron-phosphate coating that’ll completely seal down the surface below it.

Rust converters are particularly interesting because of their simplicity and safety. They’re not corrosive and perfectly safe for the environment, unlike the removers.

You do have to prepare the surface before applying the rust converter. Indeed, the chemical will bind with rust and seal it away completely. But rust itself is pretty fragile, and if it comes off, the surface will be exposed again. Make the surface even and keep some rust that can be converted.

Since not much surface preparation is required, rust converters will save you the time and energy spent on sandblasting the rust away. They can smoothen the surface and thus, work as a primer. This enhances the paint’s performance and longevity.

Rust converters are mainly used for car parts, which are too large to dip in a liquid rust remover solution.

Rust converters have many exciting features that make them a cut above their competitors.

Instead of totally washing them off, rust converters use the rust left on the surface and turns it into a rust shield. It’s a chemical reaction that occurs wherever rust exists. The protective coating does a bang-on job shielding the surface from moisture and air.

The main reason a rust converter exists is the minimization of surface preparation. Sand blowing the rust off a large part of the truck, such as the chassis, will take a lot of time and electricity. Instead of doing that, you leave some of the rust that can react with the converter.

Works as a Primer

What about the surfaces that don’t have rust on them? Rust converters have a gooey, thick texture because of the organic polymer in their formula. This covers all the places giving a nice even surface for the paint to latch on to.

Don’t Put It Back In!

This is one of the reasons why some people don’t prefer rust converters. They’re a stable formulation, but once you get it out, you can’t put it back in. Once they leave the tube, they start to get contaminated, and if they’re put back, they’ll contaminate the rest of the chemicals too.

Draw out a small amount of rust converter to prevent wastage.

How Does Rust Converter Work?

If we look at the formulation of the rust converter, there are two main ingredients: the acid and the filler. The acid can be plant-based; most often, tannic acid and phosphoric acid are used. These react with Ferric Oxide or rust, yielding Iron Phosphate, which is inert and stable and coats the previously rusted surface.

The organic polymer filler creates a consistently thick texture. This filler possesses a remarkable adhesion property to metal and presents a smooth finish after drying completely.

What Is Rust Remover?

If the thought of rust chewing up the insides of your truck keeps you up at night, you might opt for a more aggressive approach. Rust removers completely wipe out the rust. Normally rust removers have corrosive acids as their active ingredient. They’ll dissolve those rust in no time.

You’re surfing through YouTube, you’ve probably hit upon a DIY video where you dip any rusty bolts or spoon into a bowl of coke, and it comes out like a new object. Rust removers work in a similar mechanism. Coke has carbonic acid dissolved in it that fights and banish rust from the surface.

Similarly, rust removers have some acid that attacks the rust directly; most commonly, it’s oxalic or citric acid ( you can find it in citric fruits). So, the rust will either sand away or soften up which can be scraped off easily.

Rust-Oleum rust dissolver is a perfect example of an acid-based rust remover. These are often quite corrosive and hazardous. If you find a safe remover, they might not be so tough on the rust. Removers like Evapo-rusts are safe for the environment and can fight off the rust effectively. They use chelating agents that replace the rust from the iron surface.

These are some of the most common features rust removers have:

Rust removers, either acid-based or chelation-based, attack and eliminates all the rust. They mainly dissolve the rust and weakens the more resilient ones who will come off right after polishing the surface.

You shouldn’t wash the metal objects after the cleaning is done for the best results; otherwise, they might be vulnerable to rust again.

The Metal to Be Cleaned Has to Be Small

This is the catch with rust removers. The object you have to clean has to be small enough to be completely dipped in the remover solution. Like kitchen utensils, can openers, bolts, nuts, etc. If it’s too large, it’ll need too much remover solution. That’s not going to be so economical.

Although rust removers do come in two other forms, namely spray and aerosol. For effective cleaning, dipping the object in the solution is necessary.

Acid-based rust removers are most common in the market. But they’re also corrosive and dangerous to touch. So, if you’re using one, wear a protective coat and gloves, and apply with caution. Chelation-based removers are much safer.

Removers can be reused again and again until they can’t do their job anymore. Rust removers don’t directly react with rust like the rust converters; they just sand them off.

This means if you have a regenerating solution, the waste remover solution can be turned back into its original form and can be used again.

Rust Converter or Rust Remover: Which One Is Better?

So, let’s compare the contenders, shall we? On one hand, we have rust removes, which completely clears out the rust leaving no trace behind. On the other hand, we have rust converters, which reacts with the rust and makes it into a solid protective coating.

Remover Gets Rid of Rust, But Converter Hides It
One thing you have to keep in mind, if you apply the rust converter, the rust still lies dormant beneath the coating. But because of the toughness of iron phosphate, the rust is completely sealed off. Rust removers completely wipe out the rust, so if you paint it, it’ll be just like new.

Rust Removers Are Safer
You have to completely cover your arms and face before you can apply rust converters because of how corrosive they are. Because of their toxicity, you can’t directly dispose of them without some kind of treatment. In contrast, Rust converters are perfectly safe for the environment.

Rust Converters Are Less Economical
However, rust removers can be reused several times, unlike the converters. So, in a sense, they’re more economical. But you can’t use rust remover on large objects that can’t be completely soaked.

For these, the rust converter is the perfect option. You don’t need much surface protection to apply it. That’s definitely a plus.

Got questions regarding the products? Why don’t you check our list of FAQs?

#1. Where to buy Gempler’s rust converter?

Answer: Gempler’s rust converter is one of the most efficient of his kind. Your local hardware stores, convenience stores should have them. You can also find them on online platforms like desertcart, amazon, etc.

#2. What is the best rust converter?

Answer: There are several great rust converters you can find in your local shop. You have the more common rust converters that give a black finish after drying. Some of these products include FDC, PlastiKote, etc.

#3. Where to buy bullfrog rust remover?

Answer: Bullfrog rust remover is available in local convenience stores and, of course, in Walmart. You can also find them on online shopping platforms like eBay, Amazon, etc.

#4. Where to buy DRX rust remover?

Answer: DRX rust remover has received some of the best reviews. You can find them everywhere, on Amazon, Desertcart, and in local shops.

#5. What is the best rust remover?

Rust converters can completely seal off the surface and inhibit the growth of rust. You don’t have to do much surface preparation, saving time and energy. Be careful not to pour out too much; otherwise, it’ll go to waste.

Rust remover exists for the small parts that can be soaked completely. They’re mainly used for repurposing metal objects and adding shine to them. These are corrosive, but you can look for non-toxic ones. They can be time-consuming. But in the end, the best way to tackle rust is to eradicate them completely.

In the epic showdown of rust converter and remover, picking a favorite is a tough ask. Which one’s better depends on the purpose you’re using it for.

Heenan, Cannon, Mack, and Theodore are four outdoor enthusiasts. Each of them is a handyman and off-road adventurers. Dealing with different tools, automotive accessories, products related to home like sealers are some of their day-to-day tasks. They run this website to share their thoughts on various items they think are good or bad for others. Learn how they started as The Handyman Guru, and why they decided to start this blog..